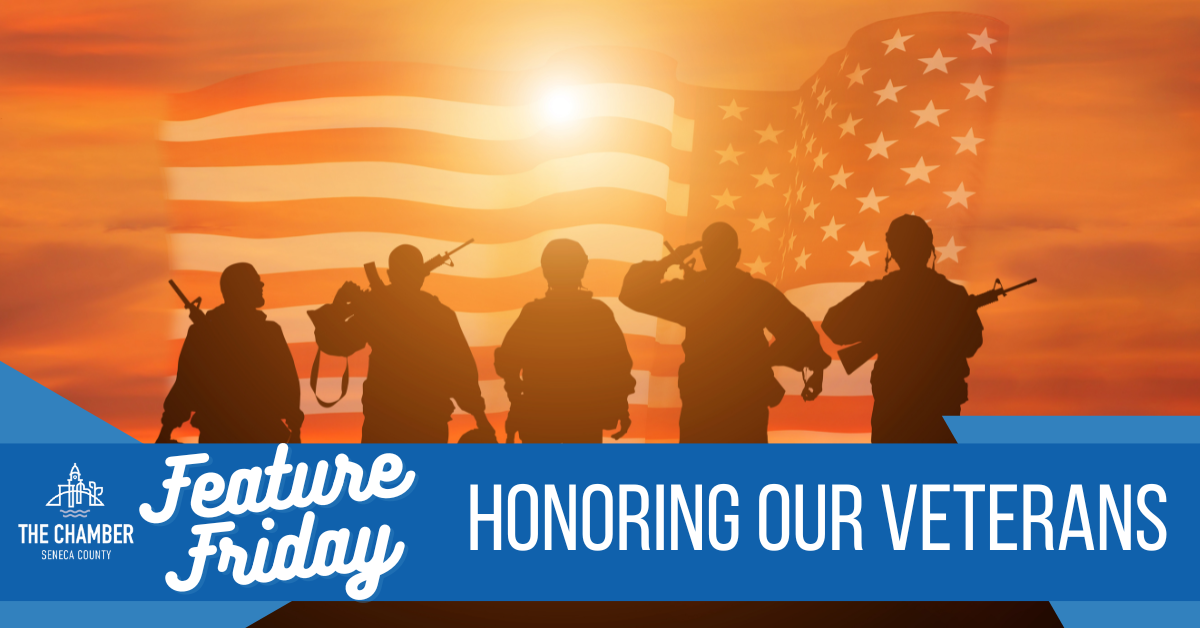 This Feature Friday we come to you looking a little different! Instead of our normal business t-shirts and the featuring of a Seneca County business, today we feature the appreciation and honoring of our Veterans in observance of Veterans Day.

The year was 1918 and on the 11th hour of the 11th day of the 11th month, an armistice was declared between the Allied nations and Germany in World War I, then known as The Great War. The following year and many years to follow, people from around the world celebrated what was known as "Armistice Day," and was celebrated on the same 11th day of the 11th month. In 1926 Armistice Day was officially named in the United States through a Congressional resolution. At the time, it was hoped that World War I would be the "War to end all wars," but just a few years after the declaration of Armistice Day in America, war broke out overseas in Europe.

The first celebration using the term Veterans Day happened in Birmingham, Alabama in 1947. Raymond Weeks, a World War II veteran, organized "National Veterans Day." This event consisted of a parade and other festivities that honored all Veterans. Since Armistice Day was originally meant to mark the end of World War I  and those who served in that particular war, a bill came to fruition that proposed changing Armistice Day to Veterans Day to encompass everyone who has served, no matter what war or branch. In 1954, Congress passed the bill that proclaimed November 11 as Veterans Day. Now, every November 11 marks Veterans Day and we take a step back to remember, honor, and thank all who have served and fought for our freedoms.

Thank you to every Veteran for their service and for allowing us all to live the lives we lead today in a country full of opportunity, dreams, and above all else, freedom. Thank you to the families of Veterans, the friends, and the communities who support the bravest of the brave and who experience battles of their own. To all Veterans, we see you , we honor you, we thank you, and we stand with you. If you know a Veteran or see one, please thank them, not only today, but everyday.