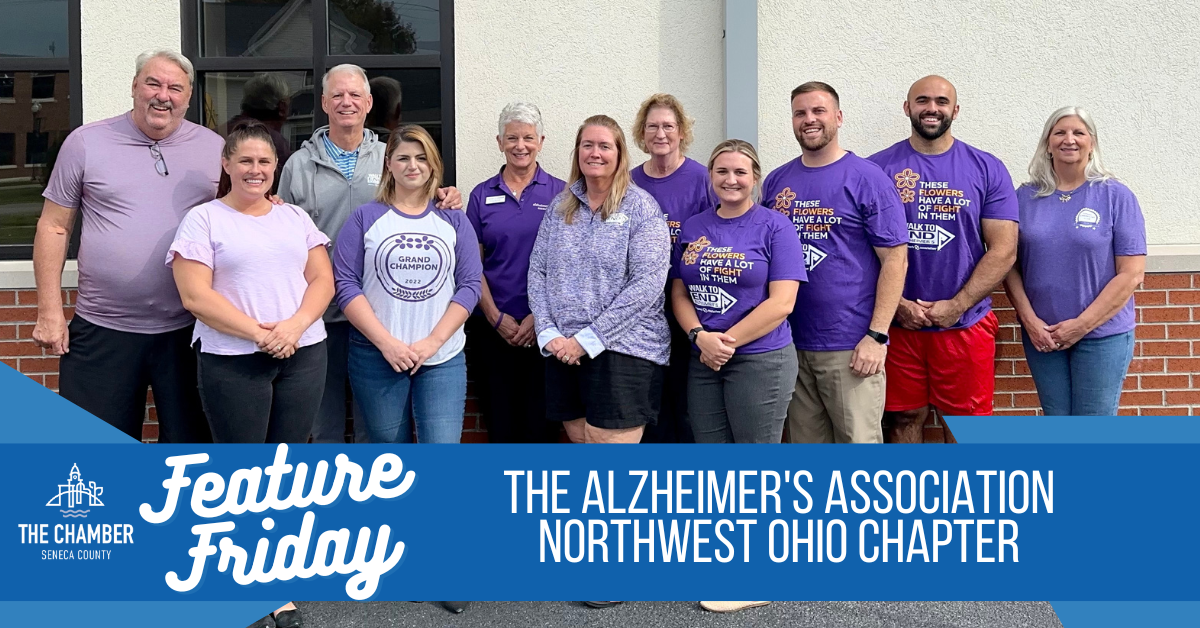 Happy Feature Friday, where every Friday the Chamber team will highlight one of our fantastic members by repping them for the day and telling the community more about them. This week's Feature Friday is: The Alzheimer's Association Northwest Ohio Chapter!

The Alzheimer's Association leads the way to end Alzheimer's and all other dementia — by accelerating global research, driving risk reduction and early detection, and maximizing quality care and support. The Alzheimer’s Association Northwest Ohio Chapter serves 24 counties in Northwest Ohio including Allen, Ashland, Auglaize, Crawford, Defiance, Erie, Fulton, Hancock, Hardin, Henry, Huron, Knox, Lucas, Mercer, Ottawa, Paulding, Putnam, Richland, Sandusky, Seneca, Van Wert, Williams, Wood, and Wyandot. The Alzheimer's Association was founded in 1980 by a group of family caregivers and individuals who recognized the need for an organization that would unite caregivers, provide support to those facing Alzheimer’s and advance research into the disease. An estimated 55 million people worldwide are living with dementia. In the United States alone, more than 6 million have Alzheimer’s, and over 11 million are providing unpaid care

Jerome H. Stone, a true visionary in the Alzheimer’s movement, was the Alzheimer's Association's founding president. When his wife, Evelyn, was diagnosed with the disease in 1970, information about Alzheimer’s — even among the medical community — was limited. With drive and determination, Mr. Stone took a disease that was cloaked in silence and helped to create a global conversation. Today, the Association reaches millions of people affected by Alzheimer's and all other dementia. They are the leading voluntary health organization in Alzheimer's care, support, and research. The impact of the Alzheimer's Association is felt far and wide across the globe. They provide care and support for those affected, they educate and raise awareness to grow understanding, they continue to accelerate research globally, they advance diversity, equity, and inclusion, they advocate for the needs and rights of those facing Alzheimer's and all other dementia, and they uphold their values of inclusivity, community, accountability, agility, and integrity in everything they do.

You can join the Alzheimer's Associations' cause in many ways including through volunteering, advocating, participating in events, and donating. The Alzheimer's Association Northwest Ohio Chapter is hosting the Tiffin Regional Walk to End Alzheimer's this Saturday, September 24, 2022, at 9am in Tiffin University's Heminger Center. The Heminger Center is located at 350 Miami Street in Tiffin, OH. This year's goal is to raise $60,000 to support local Alzheimer's services and programs while also advancing research. The Opening Ceremony and Promise Garden Ceremony kick off at 10am with the walk to follow. This year there will be both an outside route and the inside option of walking on the track. You can register here for the walk! The Walk to End Alzheimer's is full of flowers, each carried by someone committed to ending this disease. Because like flowers, the walk participants don't stop when something is in their way, they keep raising funds and awareness for a breakthrough in the fight against Alzheimer's and all other dementia.

We are proud to have such a strong group of advocates in our community and as dedicated members of the Chamber. Thanks for all you do for supporting the millions who face dementia everyday!